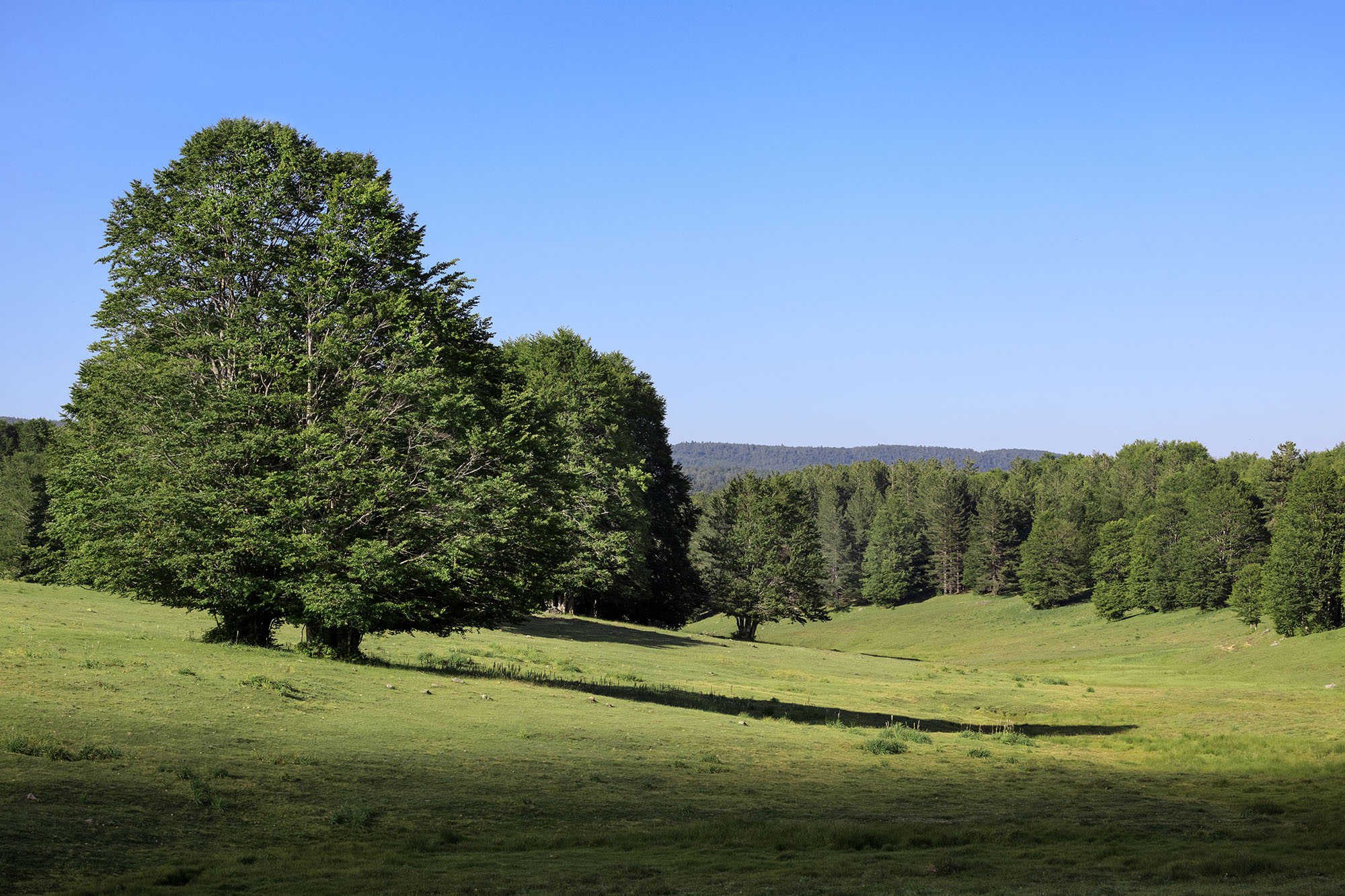 At higher altitudes we come across the beech band (photo above), a plant that here is the predominant forest species because it has found the ecological environment more appropriate to its needs; at the lower limit it borders with the pine forests of laricio and often with the neapolitan alder. Only exceptionally, for particular ecological conditions, the beech adjoins the deciduous oaks.
In vast areas, among which we can remember the forest complex of the Mountain Gariglione and of the Bear's Stain in the Little Sila and the Big Valley of Cecita, in Big Sila, the beech is mixed with the white fir.

We find the white fir in more or less extended groups, especially away from the ridges and the areas beaten by the winds. This ecotype of fir is showing considerable resistance to the so-called "acid rains"; it is for this reason that we have constant and growing requests for semen from abroad (Germany, Austria, etc.).
In the areas most sheltered from the winds there is a regression of the beech in favor of the white fir, which has abundant natural renewal.

In the Gariglione forests you can admire some centenary and majestic specimens of white fir and beech, living monuments, remnants of the virgin jungle or "Urwald", never touched by human hands, still existing at the beginning of this century and described with a great admiration from Norman Douglas in his book "Vecchia Calabria". 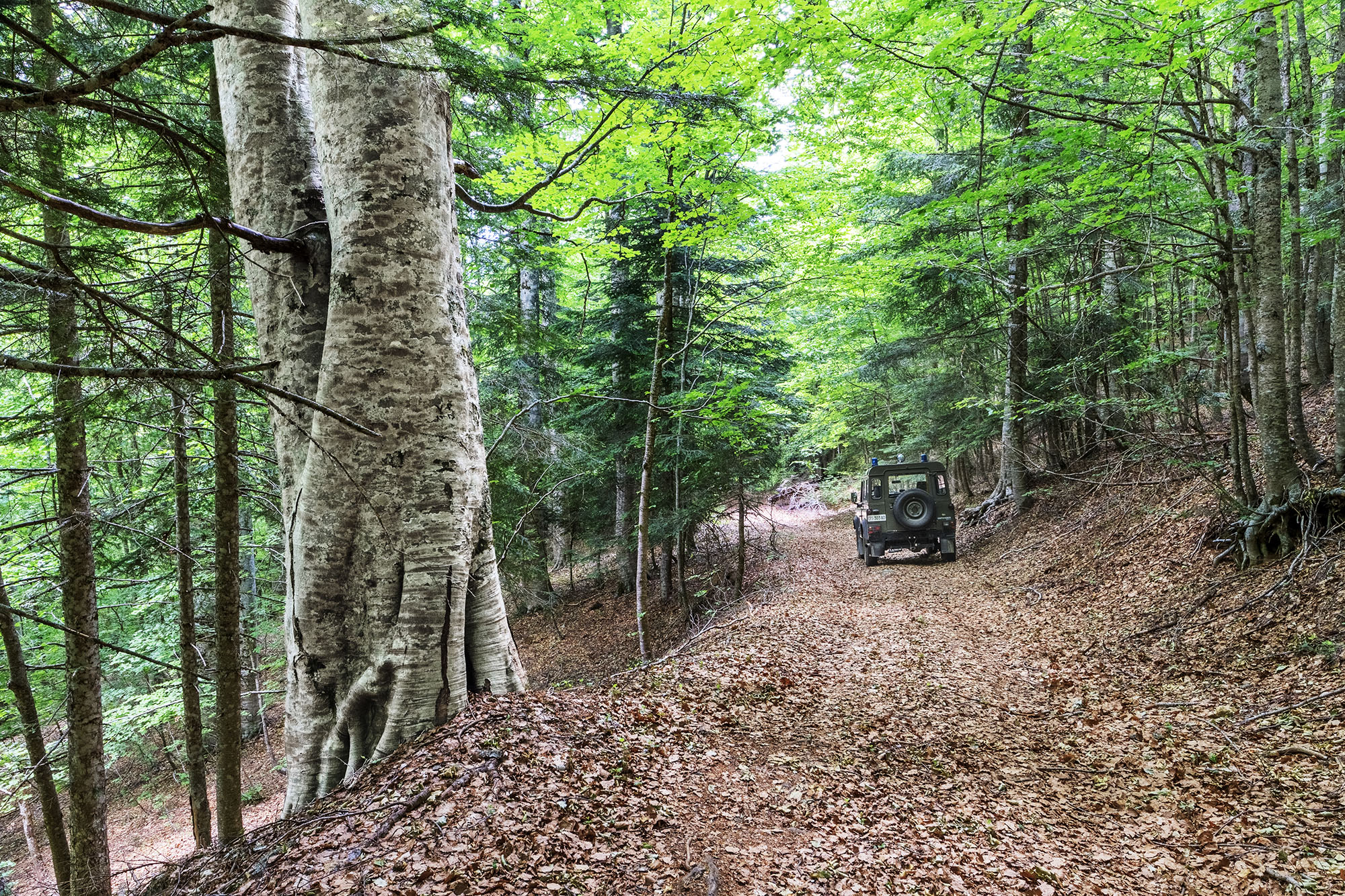 Among the other arboreal and shrub species present, that are seen as individuals or small groups, we remember the aspen, the linden, the neapolitan maple, the maple of lobel, the mountain maple, the salicone, the holly, the wild cherry, the plum cocumilio, the wild apple tree, the butcher, the evergreen daphne laureola and the mezereo, with deciduous leaves and with deadly berries if ingested; widespread is the belladonna with berries similar to cherries, but deadly if swallowed, once harvested to extract atropine, an alkaloid with medicinal properties; rare become the wild rose and the hawthorn.

In the valley of the Cecita (CS) and on the Gariglione (CZ), under the shady beech lives, on putrescent roots, the orchid in a bird's nest, a saprofita plant, which, being free of chlorophyll, has no green leaves and whose flowers make their way through the thick layers of leaves in july-august.

In the extensive and lush pastures there is a predominance of grasses on legumes and composites; the pastures become more frequent in potentilla and in the marshy zones a process of torbificazione begins which ends with the formation of nardo-carices with the nardo, the tormentilla and the luzula of Calabria.

In these areas of high humidity it is easy to notice the sphagnum, aquatic musks of high acidity environments that have the capacity to absorb several times their weight in water, the splendid male fern, the marsh violet, the soldanella and the bistorta; in the clearings populated and free from water stagnation, there is a way of finding vast settlements of asfodelo or porracchio, of asfodelina and, sometimes, of bramble.

In the Park all activities planned for the conservation of the forest and the management of forest resources must implement interventions that do not change the landscape and the fundamental characteristics of the ecosystem.